This article is the second part of the subprojects mini series. The first part was about creating a DLL project. This part will show how to use a DLL library project in another project.

Referencing a library in C++ (or, more specific, with Visual C++) is somewhat cumbersome – or should I say, used to be somewhat cumbersome. Fortunately, with the release of Visual C++ 2010 this has been greatly simplified. This article first shows the old way and then describes the new (simple) way.

For the discussion of this article assume we have two projects:

The project “MyLibrary” compiles into a DLL library (although a static .lib might also work) and “MyProgram” is just a regular .exe project.

“MyLibrary” uses the code from the first part of this series. It provides a class called PrintableInt which wraps an integer and provides a method to convert it into a string.

The project “MyProgram” is a “Win32 Console Application” project and just contains some test code in its main function:

This simply prints a “5” on the console.

In Visual C++ 2008 or earlier, to define a project dependency several steps needed to be executed (in no particular order). These steps are described below. Note that these steps still work in Visual C++ 2010.

To specify a dependency, select “Project Dependencies…” from a project’s context menu. Then check all projects the current project depends on. 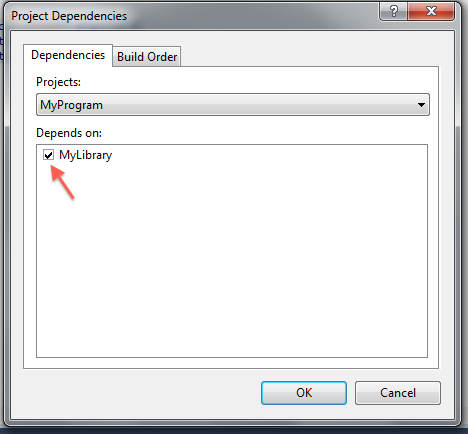 To do this, open the settings of the project that wants to use the library and specify the path under “Additional Include Directories”. You should also make sure that you’ve selected “All Configurations” from the “Configuration” dropdown field (see screenshot).

The last step is to specify the path to the .lib file of the library project. Note that even DLL projects will create a .lib file so that your project can link against the DLL automatically.

Since Visual C++ 2010 there is a new, simpler way to specify a project dependency. With this way, unfortunately you still need to specify the include path to the library project (see above) but all other steps are simplified.

To reference a dependency the new way, choose “References…” from the project’s context menu. This will open up the project settings with the section “Framework and References” being selected. There click on “Add New Reference…” and then select the project you want to use in the current project. 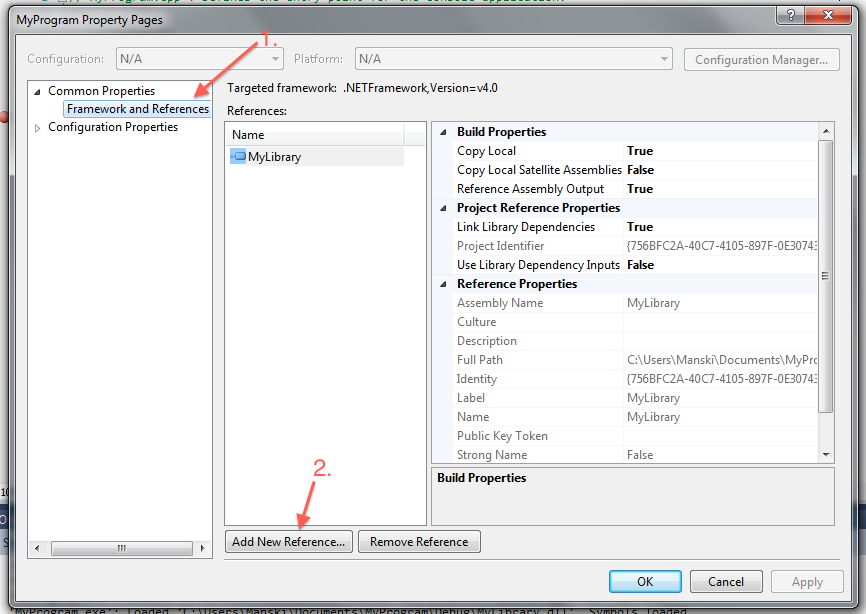 And that’s it. Your project should now compile.

Besides being easier to use, the new way has also another advantage: The information about project dependencies are now stored in the project file instead of the solution file (which is the case with the way described in Step: Specify Build Order). This way you can use a library project that has some dependencies itself in several different solutions and always have the dependencies already set up correctly. (With the old way you had to recreate the dependencies for each solution manually.)

Note: There are two options – available in the project settings – that influence how these references work. Both can be found under “Linker” –> “General”:

Unfortunately, there’s one details that make the new way a little more difficult to use again. *sigh* The problem: Visual Studio won’t copy the DLL files of the referenced libraries to the output folder automatically. Here’s what the documentation says about that:

There are several possible solutions for this problem (although, theoretically, this problem shouldn’t arise in the first place):