The last few days I’ve been hunting a bug in a C++ project I’ve been working on. This hunt again showed me how easily you can break C++ programs by accident (something that isn’t possibly in Java or C#). You need to completely understand the inner workings of C++ to avoid such pitfalls.

Let me take you on my journey and you’ll hopefully avoid this (very subtle) mistake in your work.

Let’s examine the basic (and partially constructed) idea. Say, you have two classes, BaseClass and its child ChildClass:

Furthermore, say we have a pointer to an instance of ChildClass called g_somePointer.

The last thing is some testing code which simply calls the wrapper function and does something with the returned pointer:

Executing this code will work as intended (but only tested with Visual C++ 2010 and g++ 4.6.1). ref in main() will “contain” the address to the ChildClass instance – the same as stored in g_somePointer.

Now, for some reason you want to change the variable type of g_somePointer from BaseClass* to ChildClass*:

The program will compile fine (even with the highest compiler warning level) and running the program will – at least with the compilers mentioned above – work as intended.

Let’s introduce a second – as it seems – totally unrelated change to the implementation of getReferenceWrapper(), adding a new local variable:

This shouldn’t have any impact on the program, should it?

With me asking this question you probably already know the answer. Executing the program now should give you a segmentation fault/access violation.

What has happened? This second change seemed totally unrelated. Let’s debug the program. I’ll only show the relevant code and mark the current execution position with an arrow:

At this line, the content of ref suddenly has changed to some invalid garbage. “What’s going on here?” you might ask.

It may have looked like nothing but the actual cause for the problem was changing the data type of g_somePointer to ChildClass*. Let’s explore this.

First, the current implementation of getReference() is hiding the problem from the compiler. That’s why it can’t issue a warning (and neither Visual C++ nor g++ will).

Let’s change this implementation to an equivalent (and more simple) one:

Now the compiler will give you a warning:

Important: Don’t be as stupid as I was and try to “fix” the warning by using my initial implementation of getReference(). This warning is there for a reason and the reason is not that the compiler is too dumb to figure out what to do.

The compiler is telling you here that you’re returning a reference to a local variable. This is always a bad thing. The questions now are:

Note: You won’t get this warning if you change the data type of g_somePointer back to BaseClass*. So, under some conditions the current implementation of getReference() is actually valid.

Why is this a bad thing? (Stack Frames) ∞

If you already know why returning a reference to a local variable is a bad thing (or if you just accept this fact), skip this section. If not, read on.

The problem here is that local variables reside on the so called “stack” (or “call stack”). This is a continuous section of memory that grows with each function that is called (and also shrinks again once the function returns). The following image shows the call stack for a function (= subroutine) named DrawLine(), called from a function named DrawSquare(): 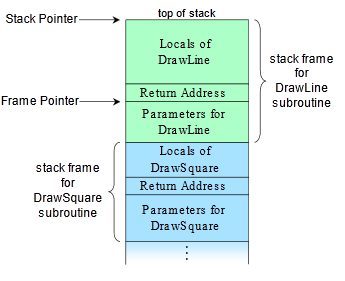 Now, if you have a reference (or a pointer for that matter) to a local variable of DrawLine(), this reference will “point” to some content that’s no longer available. And that’s bad. The values of these references will change just by calling a function that doesn’t even know these references. On the other hand, if you don’t call another function, your code may work (just like our example code above did before introducing the local variable someString) and hide the problem. Small code changes or turning on code optimizations (like when switching from debug to release build) may (or may not) surface the problem again. This kind of problem is a real pain, as you can imagine.

Where does the local variable or temporary (variable) come from? ∞

Remember that the warning doesn’t appear when g_somePointer has the type BaseClass* (but it does appear if it has the data type ChildClass*). Here’s what the compiler basically converts the new implementation of getReference() into (I’ve actually extended the code a little bit to better show the problem):

Now, when you change g_somePointer‘s data type to ChildClass*, the compiler will convert the implementation into something slightly different:

Because of this address change the compiler can’t just use g_somePointer for temporary. It needs to cast the instance first and then store it in some variable (here: localPointer). It than creates the reference to this local variable, which is bad as explained in the previous section.

Side note: Adding the local variable someString to getReferenceWrapper() broke the code above because std::string is a class that has a destructor. The destructor is “just” a method (function) which is automatically called when the object (someString) goes out of scope. As I explained in the previous section, calling a function overwrites the call stack above the current function’s stack frame (i.e. the green part in the image above), thereby overwriting the memory section containing the address to the base class of g_somePointer (to which our reference pointed).

I’ve attached the whole code of the example so that you can try it out for yourself.

Returning a reference to a pointer will result in “unpredictable” (or at least undefined) behavior when the reference’s type is a base type of the pointer’s data type.

The following code will work (although you might consider it fragile)…

… whereas the following code won’t (i.e. results in unpredictable behavior). Note that just the data type of g_somePointer changed to ChildClass*: