I recently bought an Apple AirPort Express Base Station so that I can hear music without powering up my computer. And since the AirPort Express is a full-fledged Wi-Fi access point, I thought it’d be nice to use it to extend the range of my existing Wi-Fi network.

With Apple’s AirPort Utility, configuring an AirPort Express Base Station is quite easy. There are, however, some pitfalls when trying to extend an existing Wi-Fi network. So I’m going to shed some light on this topic in this blog post. I’ll be using my AirPort Express Base Station to illustrate these pitfalls but the information should apply to any other Wi-Fi access point as well.

In the “Wireless” section, the AirPort Utility gives you an option called “Extend a wireless network”. This option allows you to extend an existing Wi-Fi network. (Who would have guessed?) 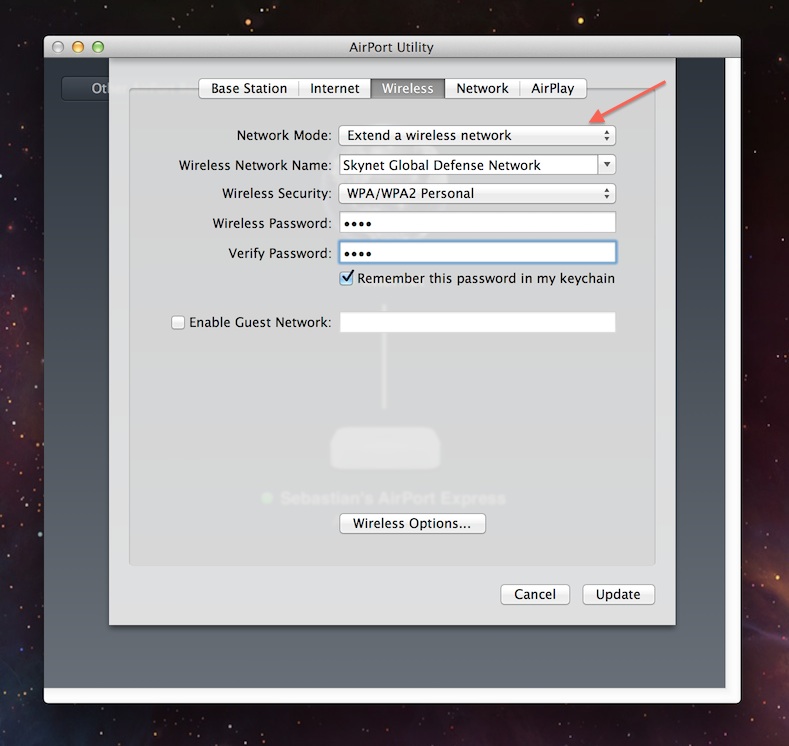 The catch here is, though, that this will extend your Wi-Fi network over Wi-Fi. So, the AirPort Express Base Station will communicate with your other access point(s) over Wi-Fi. It’ll become a repeater.

The advantage is that you don’t need any cables to extend the range of your network. The disadvantage is that this will reduce your wireless bandwidth (by 50% in the worst case). While this will probably have no real effect on your surfing speed, the speed of copying files from one computer to another will be drastically reduced.

Fortunately, there is an alternative: extending Wi-Fi networks over Ethernet (cables). This is called roaming and has existed since the earliest days of Wi-Fi.

For the AirPort Express Base Station (and maybe other Wi-Fi access points as well) there are three things you need to know:

Most modern Wi-Fi access points can choose their Wi-Fi channels automatically and you should usually let them do this.

However, if you really want to manually select the Wi-Fi channels, use different channels for each access point (if possible). Computers recognize Wi-Fi networks by their SSIDs, not by the channel they use.

Not all Wi-Fi access points can use both bands at the same time. The AirPort Express Base Station (2nd generation), for example, does support this, while my FritzBox 7270 only supports either 2.4 or 5 GHz (but not both at the same time).

If your access point support both bands at the same time, use the same SSID for both (if you have the option to choose). This helps on devices where you can’t prioritize your Wi-Fi networks (like on iOS or Android) to always pick the 5 GHz band.

You should also know that only the newest (at the time of writing) and more expensive devices support the 5 GHz band. For example, only the iPhone 5 supports the 5 GHz band while all older iPhones do not. Also, most cheap notebooks don’t support 5 GHz either.

This article is mostly based on my own experience as well as the following links:

Also, very helpful is the AirPort base station status lights (LED) listing from Apple, if you want to know what the color and state of your AirPort’s LED means.