END_OF_DOCUMENT_TOKEN_TO_BE_REPLACED

P/Invoke is a way of calling C/C++ functions from a .NET program. It’s very easy to use. This article will cover the basics of using P/Invoke.

Note: This tutorial will focus on Windows and thus use Visual Studio. If you’re developing on another platform or with another IDE, adopting the things in this article should be easy enough.

END_OF_DOCUMENT_TOKEN_TO_BE_REPLACED

The idea of CSS is to separate design from structure (which is represented by HTML). So much for the theory. In pratice, however, this doesn’t always work – or at least the solution isn’t very obvious.

One of the most prominent examples is the so called clearfix. It solves the floating elements problem (described below) but usually requires you to change your HTML code.

Fortunately, with LESS (a better CSS) this is no longer necessary.

END_OF_DOCUMENT_TOKEN_TO_BE_REPLACED

In Visual Studio when a source code file is changed, the project it belongs to will be built when the whole solution is being built. So far, so good. But what happens if you want some other files (read: non source code files) to have the same behavior?

Visual Studio (at least version 2010) provides an easy but hidden way to achieve exactly this. After you’ve added the file(s) to your project, right-click them and choose Properties (Alt+Return). 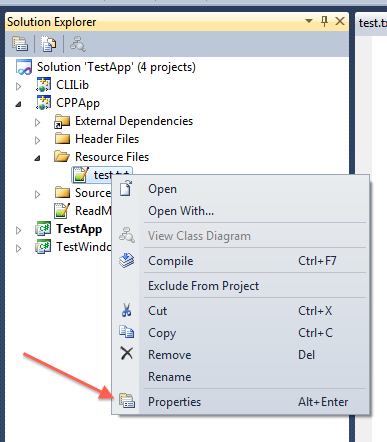 Note 2: You can have selected multiple files to make them all triggering a build when changed in one step.

In the “Properties” dialog under Configuration Properties –> General –> Item Type you select Custom Build Tool. Then you hit “OK”. And that’s it.

Changing the file(s) should now trigger a build when you build the solution (via menu Build –> Build Solution).