Just a quick cheat sheet about how variables in Bash get inherited.

Here’s the result of a call to outer.sh (see below):

outer.sh is called by the user and internally calls inner.sh – once directly and once with source.

I had it happened a couple of times now that Mercurial on Windows would give me this error:

skipping unreadable pattern file ‘D:\Documents\Programming\YourProject\’: No such file or directory

This message is strange because the path actually exits.

After some searching I found the solution in the Mercurial bug tracker:

The title already suggests the solution. There’s an empty ignore= entry in the global mercurial.ini file.

Removing this entry solves the problem.

The file is located here:

Note: It seems this “problem” is caused by SourceTree.

Are you still stuck with Windows 8.1 or earlier? Then, if you want to use Docker, you have to use the Docker Toolbox.

Docker Toolbox comes with its own “shell” called Docker Quickstart Terminal. It uses Windows’ own command window – which is pretty limited.

As I explored in Command Line Replacement For Windows, there are alternatives.

To be able to interact with Docker Toolbox in these alternative command line tools, you can create a simple batch file that drops you into the same Docker shell as the “Docker Quickstart Terminal”:

In a local network (or any other network), it’s desirable to be able to find computers by name rather than by ip address.

So, instead of using:

one wants to use:

This mapping task is typically done by a DNS server.

Sometime back I wrote an article about how to ping/identify computers by name on Windows.

Unfortunately this solution highly depends on a good router that

Unfortunately, I recently was forced to switch to a less “superior” router that doesn’t support these features. So an alternative had to be found.

Fortunately, a solution exists and this solution is called Multicast DNS (short: mDNS).

Multicast DNS lets you find computers on your local network by name. You just have to add .local to the computer’s name.

So, to ping a computer called marvin you’d use:

Bonjour seems to have a wider adoption so I’m concentrating on this.

Here’s what you need:

In Mercurial, to update a branch to be identical to another branch (without closing and reopening the branch), use this command:

This will just change the files in your working copy. You can review the changes afterwards and commit them as needed. 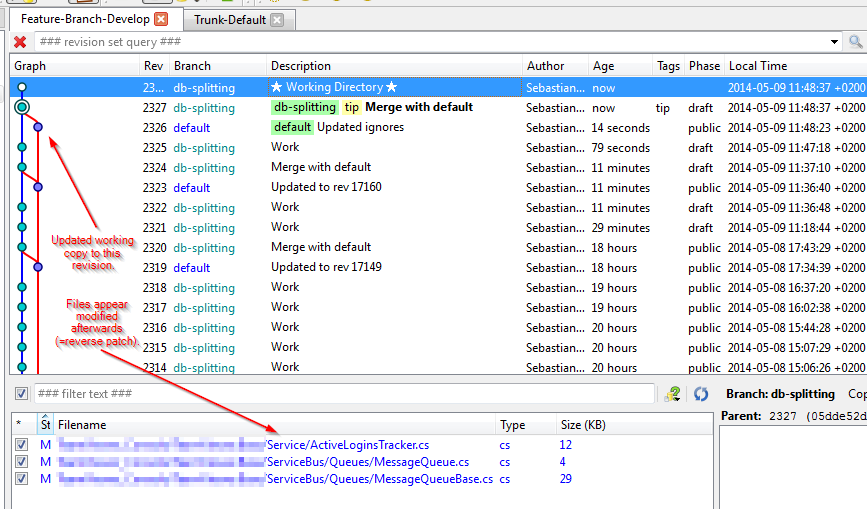